Am I Too Sensitive About Being Black? #nope #notevenalittlebit

This past year has been a whirlwind of emotions for me. Really, the last few years. I find myself at a crossroad. Let me start by saying this is NOT a bash of White people, Black people, purple people or blue people. I have some things I NEED to say!

This week I've found myself in several disagreements about the Syrian refugee crisis. I am not 100% sold on the idea of just opening America's borders to any refugees, HOWEVER, I am concerned with the viciousness and the meanspiritedness that I see. At some point during each and every concern, race came up. Out of all those times, I brought it up ONCE. And, frankly it was because I was sick and tired and I'd had enough. But, then I started thinking that maybe I am too sensitive..And, then I decided to put fingers to keyboard and speak my truth. The remainder of the blog is not about the refugee crisis at all.... It's the questions and answers that came to my mind.

Why is it not ok for me to talk about my Blackness when people remind me of it each and every day? Just when I bought their brand of bull that they were colorblind, they let me know, THAT IS A LIE!

So, you say I'm too sensitive--
perhaps it's because when I purchased a beautiful truck and it immediately started having problems with it, the general manager told me 'I know what happened here. You people do this all the time. You buy cars that you can't afford and then you make up things to get out of having to pay"

So you say I'm too sensitive--
perhaps it's because I hear more times than I care to remember, "You are so articulate"... Let me give you a hint. That is not a compliment to a 41 year old, college educated person...EVER. Why is this surprising to you? Because I'm not the illiterate porch monkey you assumed I would be.

So you say I'm too sensitive--
perhaps it's because when I went into an establishment to use the restroom and offered to PURCHASE a meal and I didn't even need them to make it because there weren't any public restrooms, a man loudly proclaimed "yea, they think since Obama became President they can do whatever they want to do"... so, you think that I want to purchase a meal that I'm not even going to eat. No, if I was doing what I WANTED to do...well, we won't go there

So you say I'm too sensitive--
perhaps it's because when I'm in a group where I'm the only Black person, inevitably after everyone else has been greeted with a 'hello", I receive a 'hey girlfriend' or 'hey, sister'.... get a dictionary. Go to sister and girlfriend. I assure you I'm neither of those to you. (I'm speaking not of people that I KNOW)

So you say I'm too sensitive--
perhaps it's because when I'm at a statewide competition sitting at a table with a group of educators and I am the only Black one, the White waitress comes over to ME to let me know that 'we're serving fried chicken for lunch'. When she sees my befuddled expression, she goes on to say "it's REALLY good and I wanted you to know". At first, I think it's not because I'm Black. It's because I'm fat. But, then I realize there are 3 other fatties at the table too...So, nah, that ain't it.

So you say I'm too sensitive--
perhaps it is because I've realized that every turn, there's a White person reminding me that I'm Black. As if, I could ever forget it.
perhaps it's because I realize that when the White person is telling me I'm Black, I'm supposed to be OK with that. But, somehow when I say, I'M BLACK. I'm a race baiter. I'm a liberal. I'm Too darn sensitive. I'm a reverse racist.

So you say I'm too sensitive--
perhaps it is because when I mention racist or racism, you get offended and start defending yourself and getting in your feelings. EVEN if I've never said White racist.
perhaps it is because you assume that everytime a Black person says racism, they are talking about you!

So you say I'm too sensitive--
perhaps it is because I have the ability to not lump you in with a bunch of crazed fools but you see me as you see every other person
and please keep your, I've got Black friends speech.
Good for you.

So, am I too senstive...Nope, But maybe I'm just a little to Black for your taste. I'm an uppity Negro. I don't pick cotton. And, I don't bow down.

Smooches and Much love~!
Posted by TrelleBlazer at 6:58 PM 8 comments:

So much to say but really nothing to say at all

Blogging had become my outlet. I was getting into a groove and it felt good. Then, I hit a wall. I had so many things to talk about. I started so many fantabulous posts, but then I wondered....am I sharing too much? am I not sharing enough? The biggest thing was I didn't want to put out a blog JUST for the sake of saying "I posted something this week"...in times past, the blog had been organic. It just sort of became..... Well, now I'm back. Refocused, rejuvenated and ready? But, I want to know, what do YOU wanna hear? More fashion? More faith? In a sea that's overcrowded with every kind of blog you can imagine, I don't want to just be one more. I want it to be beneficial to the reader and for you to have some kind of takeaway. So comment and let me hear your thoughts... I'm ready....

Until next time TrelleBlazers, be good to yourself! Muah 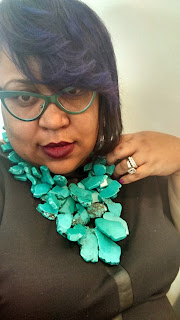 I decided that I wanted to do something slightly different for today's blog. I met my mate when I was 14 years old. We started dating when I was 17. We got married when I was a week away from 22.... I was young and thought I knew everything and was seriously ill-prepared to be somebody's wife AND to be 500 miles away from everything and everyone I've ever known and loved. So, almost 19 years later, people are constantly shocked when I say I've been married to the same man all these years. The 1st thing I want to say is ANYBODY that you think has a perfect marriage, please know it ain't true! I love my husband beyond measure. We have an amazing relationship. Amazing doesn't equal perfect or good all the time. We fuss. We disagree. We get in our feelings. He gets on my last nerve sometimes. I'm sure I sometimes get on his (probably not that much though...LOLOL). I could write a book on our experiences, but I thought it would be nice to get marriage talk from the male perspective. So I asked my honey to jot down some thoughts on love and marriage. Short and concise is what he gave me, however I can honestly say these words and actions are what brought us through.....

"Marriage is about making it work with what you have and who you are.  What works for one couple may not work for another.  But if I had to pick one thing I would say in marriage,  each person has to be determined.  Determine to carry the weigh when your spouse cannot or will not. Be determined to do better when you are the weak link.  Determined to make it work when you  realize that your spouse will not change who they are.  This does not include physical abuse,  infidelity or the like.  When you say I do, mean it and keep in mind ‘for better or for worse’ comes in many ways and different than what we usually consider.    "
Tyrone J. Chase, Jr.

Well, TrelleBlazers, that's it for today. Until next time, be good to yourselves (and to those you love and are in love with!)

Muah and much Love, 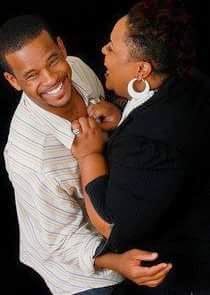 Completely Vulnerable...And I LOVE it! (well I'm learning to love it LOL)

I'm betwixt and between in EVERYTHING in my life right now. I find myself at a crossroads. I've come way to far to turn around, yet I find myself just idling and not really moving forward. It's often difficult to put what I want to do into words to explain to someone else, but I see it, I dream it, I BREATHE it.....Anyhoo, knowing what I'm seeing in my mind, I decided it was time to do a new photoshoot. Initially, it was for some of my upcoming projects, but then I realized, I NEEDED this because I need to MOVE forward. I recently preached a sermon entitled, "Live, Move, BE"...It impacted me in such a profound way. Anyhoo, I arranged a shoot with a photographer that I've been admiring for a while. We communicated a few times via email about my vision for the shoot. I was really looking for something that wasn't typically sweet, but was sultry (yet tasteful). I wanted some next levelness LOL. I didn't really think through exactly what that would entail...Fast forward to the day of the shoot.

Everything was going great until he pulled out a chair and asked me to sit. I do NOT sit down in pictures. Although I've lost a 'few' lbs, I'm still a big girl. I struggle with body issues and am very conscious of my stomach while shooting. I was SO uncomfortable. I wanted to ask him to stop. But then, something happened. I'm sitting there and I'm thinking, "LaTrelle, you're paying for this, so you just better go with it". And then I did. Although I was still not 100% comfortable, I decided to just suck it up (literally, cause I was holding my stomach in for dear life). What happened over the next 45 minutes was truly magical. Because he challenged me to do something I don't normally do, next level was exactly how the photos turned out. I felt confident. I felt in control. I felt powerful. I felt sexy. Now don't get me wrong, this wasn't the first time I've felt that way. Absolutely not. However, usually I do not relinquish control to another person about my images and how I'm photographed.

So, I challenge each of you, as you're looking to move to next level, you're probably gonna have to relinquish some control. It's scary. It's a vulnerable place to be in. But, literally the week after the photos were taken, I was featured on a plus size website as their last fierce photo of the week. ......

This is the beginning of the newness of my journey...to live, to MOVE, to be! If I can face a fear and conquer it, I know you can do it too....

Until next time TrelleBlazers, be good to yourself...and you know what else? Make sure you're FIERCE while you're doing it! 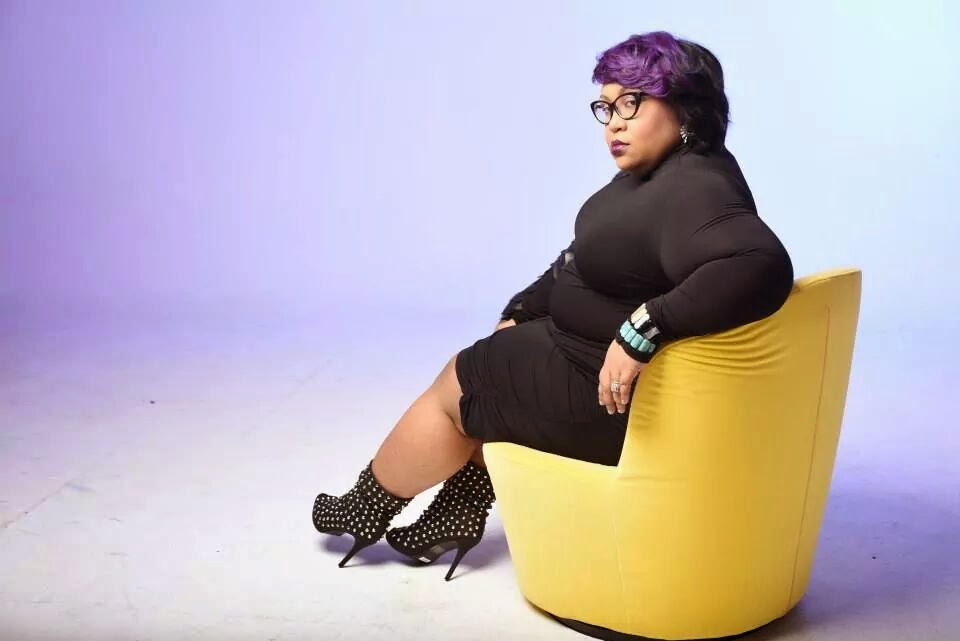